Well, I'm not moving as fast as I had hoped. We all know how life gets in the way of some of our goals. That, plus I don't seem to have the stamina that I had just a couple of months ago. The back surgery fixed the cracked vertebrae but has done nothing for the muscle spasms that I am having in my back. I can't seem to quilt as long as I would like. Quilt, rest, quilt and so on.

As a result, I have had to make changes to my design plan. I tried that new plan out on the corner and I think I can get it done in time. 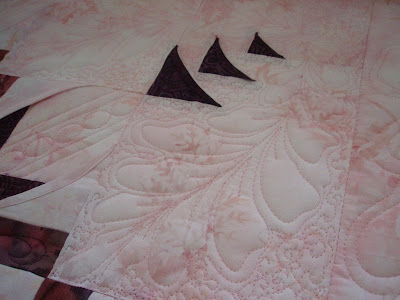 The quilt pattern is by Annette Ornelas of Southwind Designs . Check out the site. I bought a couple of other patterns from her. I love her work. Debbie, my piecer, said that it was the most intricate quilt to make that she has ever encoutered. Even though, we got permission to modify the pattern (to change the size), she still wanted to honor the design. It is very cool. I also love the fabrics that we chose. Lots of contrast makes those stars jump out. Plus the fold-back, similar to cathedral window, is so unique. Debbie did a great job. I want to quilt it so Debbie gets the good comments from the judges that I know this quilt will bring.

So I have until Friday to get it quilted and then a couple days to get the binding and sleeve on. By then, it will be time for overnight FedEx time.
Posted by Ramona-quilter at 4:18 PM No comments: 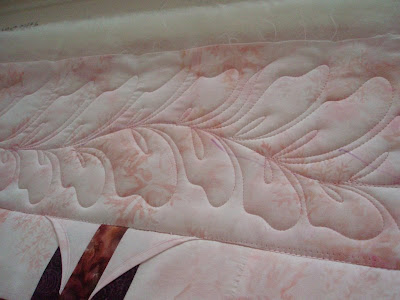 I'm not going to break any speed records at this rate. The first border and SID are done. I even knotted and buried my threads. LOL, I wonder how long that will continue. Not too happy with the vein on my molars either. I usually use a just a closed curved vein. Note to self: Do not try new stuff on your show quilt. I wonder if I can make this the bottom of the quilt (shhhh, don't tell the judges - wink - wink - nudge, nudge).
Posted by Ramona-quilter at 5:43 PM 3 comments:

So I am moving slow but I am moving. I just got my MQS show quilt pressed and loaded. I will start quilting it first thing in the morning when I am rested. I have the map for the quilting that I plan to do and hope that I do not need to make any last minute changes. 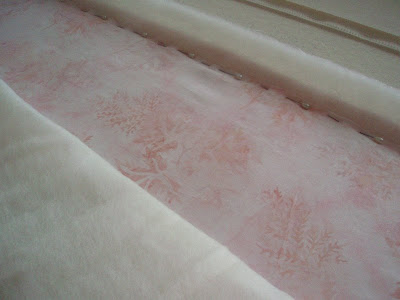 I will have to hurry to get it to MQS by the deadline.
Posted by Ramona-quilter at 5:34 PM 2 comments:

The gang down at The CraZy 9 Patch invited me to join their block swap a couple months ago. I haven't really worked at the C9P in a while - I was their tech support for computer problems for a while. I am a regular at the shop and was thrilled to be invited to this block swap. There are 12 of us and we were given a half yard of the challenge fabric. The challenge fabric was a batik with pink, green, yellow, and blue. Ewwww. It reminded me of the old bubble gum ice cream my kids used to try to get me to buy them. We could choose any block design, 12.5 inch unfinished. The blocks were supposed to be kept a secret.

The logo on my business card is the card trick block so of course I chose that block pattern. I have been "under the weather" for several weeks and was not up on the news at the C9P. Martha, the owner, invited us all over to her place for the big reveal along with a light supper and dessert. 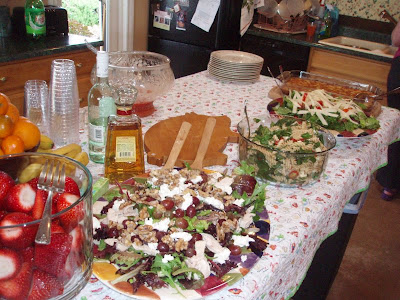 Here is the island at Martha's. Yeah, the food was yummy. 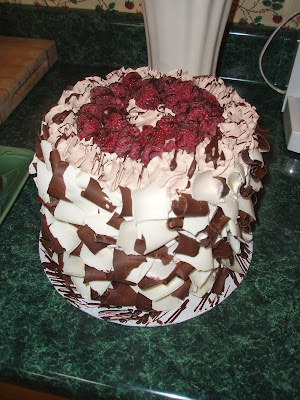 And this was the cake. Decadent, huh? You bet. It was 6 or 7 layers with chocolate panache or raspberry filling between the layers. 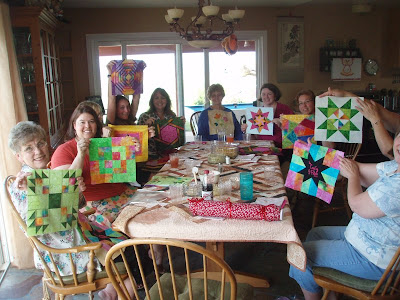 And here are the participants (except the hostess (Martha) and the photographer, me) with their respective blocks. Left to right is Marilynn, Jody, Lyn, Danielle, Susie, Betty (Mema), Kim, Christi, Lorna, and Debbie.

And finally (drum roll, please) the the big reveal. I can't wait to put these to together in a quilt loaded with memories of my friends at the shop. 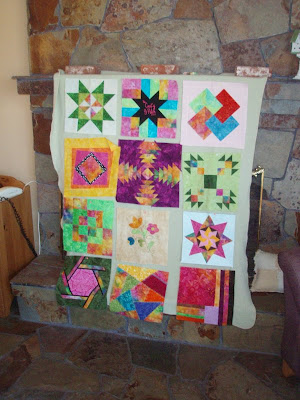 It was a blast. I hope that we do it again next year.
Posted by Ramona-quilter at 8:57 PM No comments:

Vertebroplasty on my spine

I've been on pain pills and muscle relaxers for about 6 weeks for a compression fracture on one of my vertebrae. I'm not sure how the doctor explained it to me. I'm not smart about medical stuff. My brain interpreted the doctor's words as "put a needle in the spine and shoot in some glue". That is probably an over-simplified version but you get the idea.

So the surgery was Thursday. I imagined that it would be simple; stick a needle in my spine and squirt in some glue. Easy peasy. Not quite. I found out that they normally put you under for this type of surgery. But because of my emphysema and apnea, the doctor did not want to take that risk. They gave me a local so I was awake for the whole thing.

Well, it seems that you can’t just push a needle into a vertebrae, the bone is toohard. Really? Now I think that I would remember if the doctor had said anything about a hammer. So he had to use a hammer and chisel to make a hole for the needle to get into the vertebrae. I was on my stomach with my arms extended over my head so they could get an IV in one arm and a blood pressure cuff on the other arm. I never lay on my stomach, it is too hard to breathe. So I kept my eye on the prize and focused on my breathing.

I just felt pressure on my back, no pain. But that hammering noise really surprised me. There was a large x-ray machine in the operating room. It was like a 7 foot tall “C”. The doctor pounded the chisel for a while and then he
took an xray to see where the chisel was. He took 3 or 4 xrays until the chisel was where he wanted it. It was just under 100 taps on that chisel. He told me when he was putting the glue in. Oh, yeah. I'm almost done.

So far no real pain. Then two nurses came up to my head where my arms were extended and they held my hands as the surgeon pulled the needle out. OMG that was horrible pain.

It has now been 3 days and I can feel the difference. I have pain from the hammer pounding my spine but it is more of an ache that the piercing pain that I had with the fractured vertebrae. I am down to one pain pill and one muscle relaxer a day. I am still sleeping in the recliner, though. I am hoping to be able to sleep in my bed by Tuesday and start quilting again by Thursday.

I entered a Mexican Star quilt into the Machine Quilter's showcase (MQS) in Overland Park, Kansas. Entries were due March 19th. By then, the Mexican Star was pieced and waiting for me to quilt. I am still keeping my eye on the prize. The prize is to finish quilting it in time to send it off to Kansas. A ribbon would just be gravy.
Posted by Ramona-quilter at 1:49 PM No comments:

No wonder the MRI questionaire included questions like "Are you claustrophobic?".

I have a compression fracture on one of my thorasic vertebraes. It's T10 for you medical types; it is just under my bra-line for us non-medical types. The xray showed the fracture but it does not show if any blood vessels or tissue are stuck in the fracture. My doctor ordered an MRI of the T10. The first try was on a mobile MRI machine. It is slightly smaller than the ones I have seen at big hospitals. It was like a little tunnel. My right foot had an MRI in September. But only my foot went into the machine so it didn't scare me. I noticed that it was noisy but they gave me ear plugs to wear.

But the MRI on my spine required me to go head first into that little tunnel. My arms scraped against the sides and I just could not catch my breath. I don't think I paniced. I just told the tech that it was too uncomfortable. Sure enough, both arms were bruised from scraping the sides of the tunnel.

So they found an "open" MRI machine just up the road at a medical clinic. That was shaped like a small "c". I laid flat and they put a cage-like thing over my midsection and slid me sideways into the MRI. I opened my eyes and could not tell how close my head was to the top of the MRI. I thought, I have to get this done or they will not fix my compression fracture. So I just started praying. I prayed for everybody I know and some people I don't know. I just kept up this silent dialog with the Lord for 35 minutes until it was done. The MRI confirmed that it was a bad fracture but no complications with tissue. OK, I'm ready for surgery.
Posted by Ramona-quilter at 1:27 PM No comments:
Newer Posts Older Posts Home
Subscribe to: Posts (Atom) 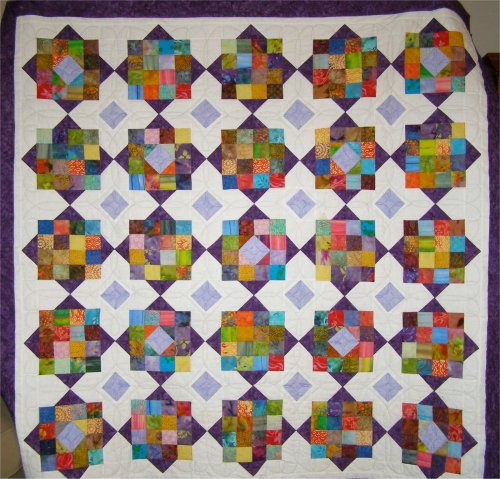